just so that y'all don't think we had too smooth of a ride getting here to Framboise Manor - here's some pics of our moving day...it was pretty fun stuff! (oh and i took the term "y'all" from my good buddy MDR!)

our movers were supposed to arrive at our old house in the city at 9am. they were an awesome crew and actually got there at about 10 minutes to nine. but like one of my old Lieutenant Commanders once told me - i have the exact opposite affliction that poor King Midas had. everything that he touched turned to gold. my LC told me that - somehow everything i touched turned to sh*t. what can i say - the man may have been right!

our moving truck came up our one-way street and then had to back into our driveway. and in the process drove over the meridian between the two sides of the street. and got stuck. not kidding here - the truck got stuck! have a look-see for yourselves. 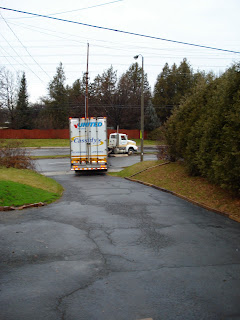 yep - that's an 18-wheeler stuck in the meridian on a very busy street that goes one way AND it is at rush hour!

we had cops on both sides of the street after about five minutes - they were trying to re-direct traffic. on one of the busiest streets in ottawa. during rush hour. as my Uncle Gerald says - oh man! 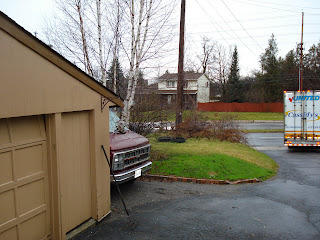 jambaloney, the cops, the crew in the truck, passers-by - they tried everything to get that truck un-stuck. we brought out wood shims, cardboard, ruined 3 or 4 carpets - nothing seemed to be working. this is at about 11am-ish! 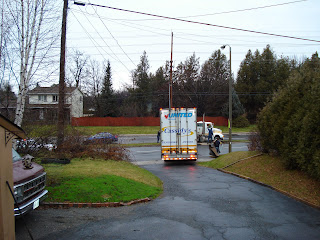 nothing worked. and because we had all of our stuff already packed, boxed and marked - we were told it would be a four hour job - maximum. it took four hours to get the truck un-stuck! 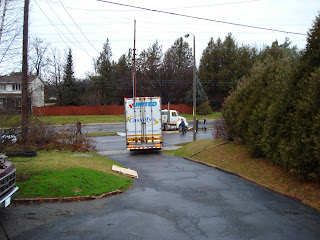 oh and then because i have the opposite of the Midas touch - remember? then we get a call from the bank saying that we have to go in and sign some more documents immediately or our mortgage payoff would be screwed or something! we had 6 strangers - nice strangers, mind you - in our house at the time. we had to leave to go to the bank. we called jambaloney's mom and stepdad and they dropped everything to come over and house-sit for us while we went to the bank.

ya - Leaving Las Vegas sure was a trip. one that we will never forget.