it's "meep-meep-meep" time of year and i love it!

although, as a trained and an UN-certified linguist (korean) i can't help myself but go out there in the evenings and try to get those frogs to learn another word. i've been trying for 7 years. they still just say "meep-meep-meep". i'm not a very good teacher!

here's a pic of all 4 cats. click to enlarge. 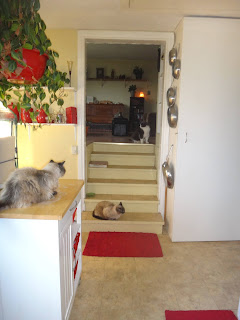 in order of appearance that's the Rat on the hutchy thing, Mankley Spontoonch on the bottom stair, Moby Shamby at the top of the stairs and Noodie-Noo on the ottoman. jessh louise it is not easy having 4 male stray cats...3 of whom came from the woods!

i outdid myself on this bone broth kids! 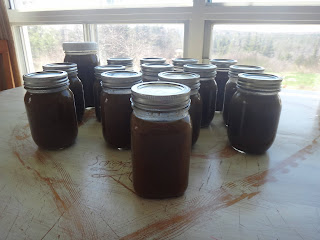 i really don't recommend it for the frail or children. this stuff can be used in place of concrete to hold up 50ft poles! that's a broth that i boiled a ton of bones in for 10 full days, added every herb known to man and a bucket load of apple cider vinegar, with the Mother, of course!!!

then felt i had to outdo myself with a veg broth since we were low. 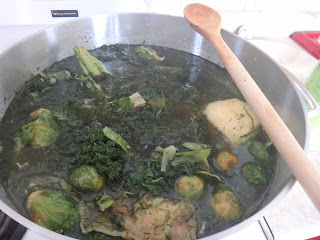 jambaloney almost choked when he took a tiny sip. there is a ton of parsley, kale, dill, cabbage, swiss chard, brussel sprouts and every other thing that was in the freezer that even looked remotely green.

and this kids is how i do my cooking. it's not bad enough that i have a small kitchen and a barbie fridge and stove. no, i have to work around cats who sleep on all of the extra space that i have in my kitchen! 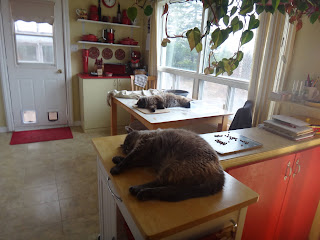 my man was in to work today. he came home fried. he has worked every day since september. he thinks that if he works on his contract for 4 hours and then goes out in the yard and prepares the garden for 3 hours - he thinks that is a day not working because he hasn't actually gone into work. then he works another 4 hours on his contract. then when he goes in to the plant he runs around for 8 straight hours. then comes home and works another 2 or 3 hours. he works every.single.day.

kids - the buck stops here. when i left my last job, i didn't have a single ounce of energy left. Framboise Manor has helped me bucketloads in that department. i know what over-worked looks and feels like.

he went to bed at 4pm. he woke up at 7pm, asked me what time it was and said he would get up in 5 mins. it's 10pm. he's still in bed. and he will stay there until he wakes again on his own. he is soooo freakin tired. i will stay up until he wakes so that i can feed him when he does wake.

there is NO work for him tomorrow. NONE.ZERO. i will not allow it. he needs rest. he needs so much rest. i need to take care of him.

and i will! i will fight off ninja turtles if that is what i need to do to take care of him! or maybe i will make him a breakfast of poached eggs, hollandaise sauce and lobster. oh ya - that's what i'll do. ninja turtles be damned!

hoping you all are having a good start to your week! and sending love.
Posted by kymber at 10:05 PM