INTO the hellhole.... jambaloney here, i'll cut to the chase - sometimes ya just gotta buy pre-made - here is a brand-new attic ladder and my feet: 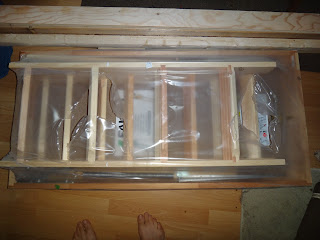 of course the ladder itself is pre-made, the place to put it.... that's the fun stuff! if you have read hellhole - part 2: lighting up attic #1 , you might remeber we left off the pic below called "site of former kitchen light", now renamed "site of new attic ladder if it kills me!" 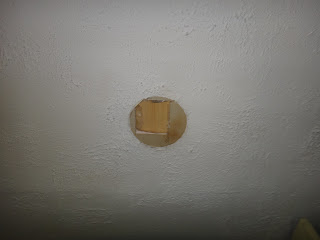 okay back into the hellhole, you see the need for a better way, yes? 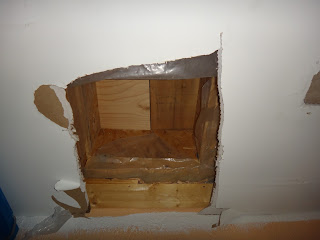 the plywood that spans the trusses at the top of this next pic is over top the "site of former kitchen light".... nice shovel, eh? need it to move around all the blown insulation, good thing it is plastic, as you can see, you never know where the wires are in the hellhole! 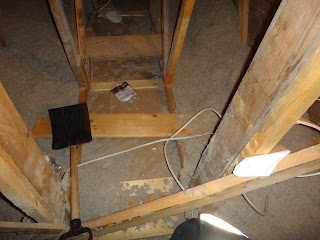 here i measure the width between the trusses.... need 22"...JUST GONNA FIT!!!! (these are "homemade trusses, not always the same span - challenges make us better, right?? 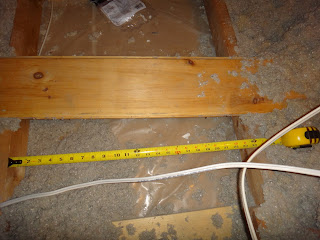 okay now, the length....47 1/2 ".... from the, wait... see the 1x3 boards that are here and there under the trusses? that is what the kitchen ceiling has been attached to, they are here and there and..... anyway... i DON"t have to gut the one at the "site of former kitchen light" thank god! especially because at the other end is a bunch of wiring, i really only have JUST enough space lengthwise. 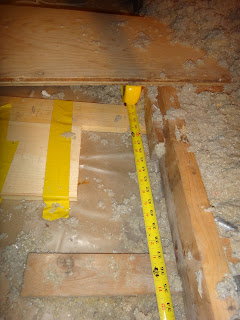 i put a nail and then a nicely colored piece of string to mark the first corner: 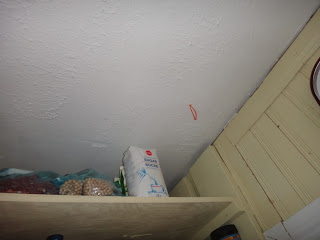 which rapidly becomes just nails, 5 more and i know where to cut from below, and from above, then a bit more below.. 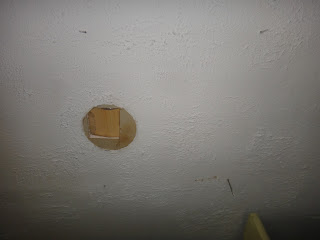 but mostly from below with a a plastic "catcher" to minimize crap in the kitchen, kymber appreciated this effort the most i think!! 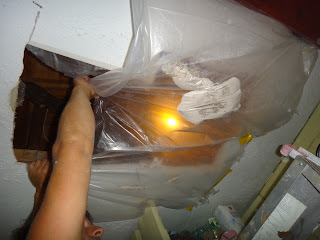 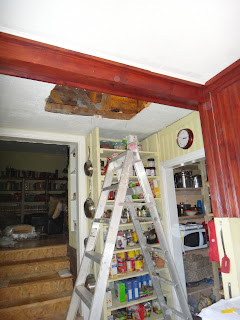 at this point i kinda got up some steam and laid the camera down for a while. in the pic below you can see the 2x6 cross beams i put between the trusses for extra stability, various pieces of wood of various thicknesses that i had to add to the trusses to frame it out, and finally, the attic ladder in the attic supported above it's final resting place. i horfed that thing in there above my head in one go, determined at this point am i: 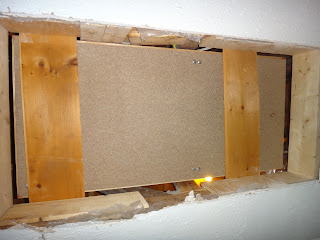 the tricky part is installing two end pieces that the ladder frame/sill sits on, but not the door. i refused to let kymber in the hell hole so i put a third in the middle, just in case i blew it and carefully removed the supporting boards above and lowered the attic/ladder/stairs/whatever in place: 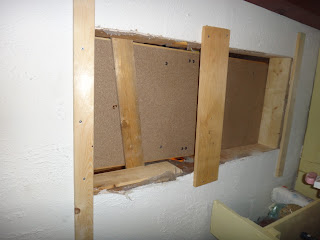 i measured correctly - success!!! i then went up the original hole and shimmed and anchored the crap out of the frame using a variety of wood as the spacing was never the same in any place, i did a good job though! 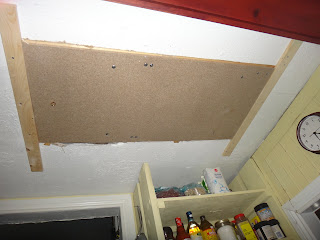 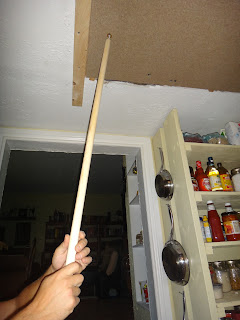 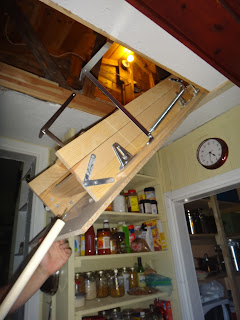 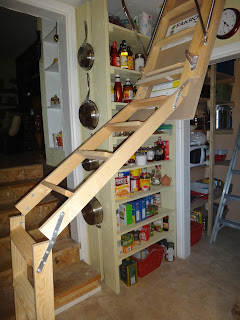 set the last bit on milk crates, kymber to the rescue to help "measure twice, cut once, measure RIGHT, measure again, cut once.... 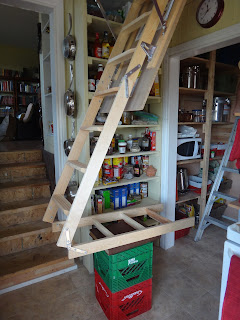 and WE HAVE LIFTOFF!! 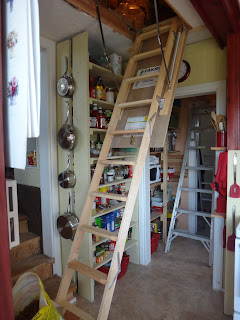 it works perfectly and has made a major improvement to the hellhole.. next step - a floor! i felt a rather high measure of success!

cheers!
Posted by jambaloney at 9:51 AM