we went to the office christmas party at LobstersRUs last night! 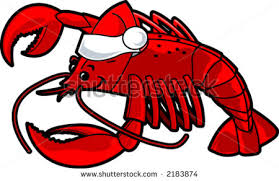 what a great time we had! jambaloney introduced me to a ton of people, there was tons of food, a surprise live singer, a surprise gift, getting a pic taken with Santa, tons of dancing and just all around fun!

let's start back at the beginning! we planned on meeting up with our besties c & b down at our community centre in order to drive out together. our besty c just got a brand new tricked-out nissan and although her and b are chain-smoking fools - she won't let anyone smoke in her new car - not even herself - bahahahah! then we waited for their daughter s to show up and then we made a caravan and headed out to a nearby village where the party was being held. everything was going great until we got to the turn-off point and c turned left and jambaloney said "where is she going? she's making the wrong turn-off". now c has been working for LobstersRUs for 13 years - i think she would know where the turn-off was, right? but we all followed behind and jambaloney said "she's going to the general store?"...and that's where she took us! she had to run in and get some milk - bahahahahah!

then we were off again and this time went the right way to the party! holy moly - there were already a ton of people there. and it was freezing out with the wind blowing right up the harbour! their community centre is huge! so we went downstairs to enjoy the free buffet! there must have been 200 people there! the line-up went around in a circle and up the stairs! but the wait was worth it! the catering company only put out certain portion amounts and kept refilling the trays with fresh, hot food so the food was always steaming! there was a poutine station and the french fries and gravy were to die for - i had 2 portions. then there were buns, 20 different salads, scallops, chicken balls, fried rice, chow mein, broccoli and beef, ham and turkey - it was all delicious! several people went back for seconds and thirds!!! then all of the employees were given 3 free drink tickets!!!

then we headed upstairs to get ready for Santa and the gifts for the children. during this time jambaloney took me all around the room introducing me to a bunch of different people. he introduced me to d who is someone jambaloney works very closely with and d said that he would be starting the party singing onstage. we laughed. we thought he was joking. then Santa came out and every employees children were called up to get a gift - every single child! the girls who work in the office kept the whole thing moving by getting the next set of gifts ready, taking pictures with Santa while the owner's wife called out the names. it was done very smoothly and each child felt special! there were nerf guns and barbie dolls and little miniature salons all over the dance floor!!!

and then every single employee was called up to receive their christmas bonus and their spouses received a gift. jambaloney and i were floored when our names were called - he got a cash bonus and i received a beautiful bag of strawberry-flavoured body shop products! and everyone - EVERYONE - had to have their picture taken with Santa! when jambaloney gets our pic from work, i will share it here. i had to sit on Santa's lap and jambaloney kneeled next to us - what a hoot! here's my gift: 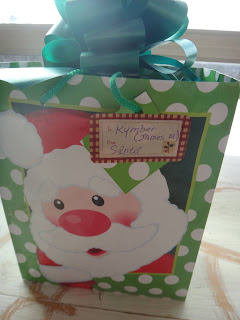 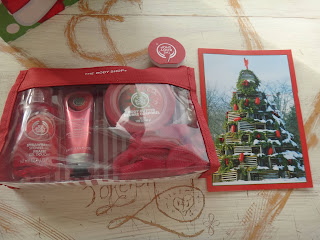 then the dance started and d, who i mentioned above, got up on the stage, started playing guitar AND singing! we were all floored! he was awesome! he had some pre-programmed equipment that had bass lines and drums and such and he played the guitar and sang a bunch of really good songs! after we got over our initial shock, i grabbed my besty c and we danced to the next 15 songs in a row - he was awesome!!! me and my besty usually are up on the dance floor first at all dances until people have enough time to get a few drinks in them before joining us! we had a blast dancing and then when everyone else started getting up the party really started!

d took a break and then another awesome singer/guitar player took over and the dancing continued. there was much fun, much freezing out on smoke breaks, much meeting new people who had so many good things to say about my jambaloney. then our friend k showed up and she and i had a really good conversation and did some dancing. she's a young girl and the young people were hanging out over in the corner. i told her she didn't have to stay with the old people and sent her on her way. she came back several times though - she's sweet like that!