stew and doughboys, stirfries, shrimp and catching you all up on our last weekend's crazy activity!

is there anything in the world more delicous than stew, doughboys and pickled beets? i know - dumb question right? 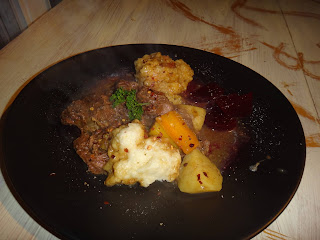 this is what has been keeping the maniac occupied.... 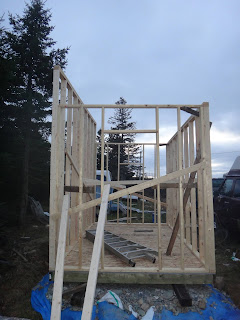 while i cook and make sure he is fed and watered regularly - bahahahah! 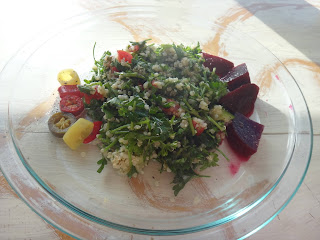 we are having some nice, cool autumn days and we are enjoying them! 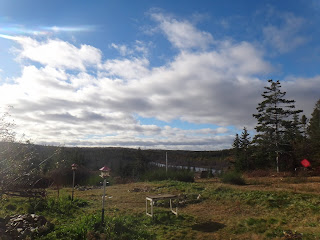 here's a chicken stirfry with rice and kimchi and pickled beets - yummeh! 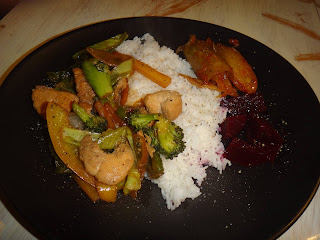 and some korean japchae with shrimp and kimchi - deelish! 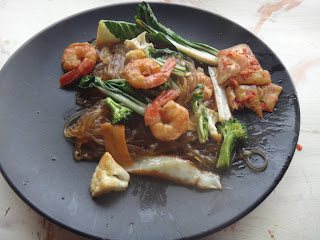 sometimes tho kids it's just about the shrimp and dip. we get some delicious and big shrimp here. 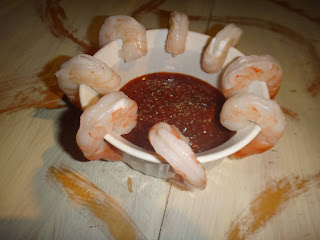 and how about homemade, breaded sweet and sour pork? 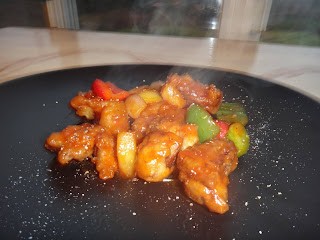 we actually ate that for supper 2 nights in a row it was so good! we also did up a bunch of homemade, breaded pork balls and put them in the freezer for late night snacks.

so on to last weekend's craziness: our sister village of fourchu is holding their every-5-year-reunion next summer so they are holding a bunch of different functions to raise money. last saturday night was the male fashion show - a fashion show with a twist, mind you and jambaloney was asked to dj. we met up with the reunion committee and came up with a list of 28 songs to be played during the show.

now here's the twist. the men dressed as women - bahahahah! and they all looked perfectly horrific!!! there were 8 models and they did one show of being a "something" like a cheerleader or a nurse, then they came back out in their lingerie or bathing suits, and for their last number they did their fancy dress. it was hysterical! our friend b was the emcee and she was awesome - her and jambaloney were completely in synchronicity with when to start and stop a song. they guys really hammed it up...for example, our cheerleader came out dancing to "Hey Mickey" and our nurse came out to "Doctor Doctor". i had the list of songs and downloaded them all and the music that we as a group chose was all upbeat and very feminine. we played Shania Twain's "Man, I feel like a woman", some Abba songs, and a bunch of other really fun songs.

our friend v won the competition. each model had an agent go through the crowd with a cup and while the model was dancing and making their way to the stage, the agent would collect money. whoever collected the most money won and that was our friend v. i was so proud of him!

after the show was over we had a bit of a dance. well, me and my besty and her favourite cousin b had a bit of a dance. lots of people left and then others just kind of hung out together yakking. me and c and b didn't care - if there is music playing then we are dancing! we love having the whole dance floor to ourselves - bahahahah!

the next morning i told jambaloney that my bum was hurting and i couldn't understand why??? he said that me and my besty c, who were acting as runners to let people know when to come on and let the emcee know if someone wasn't ready or whatnot - well, jambaloney told me that we spent the whole 3 hours standing by the door where the models were changing and doing our little point our fingers in the air and bouncing from leg to leg. that totally made sense! i could barely walk on sunday! plus the fact that we had the whole dance floor to ourselves for another 3 hours so no wonder my butt was hurting!!!

the reunion committee ended up making $1,400 from the fashion show!!! who knows what the bar made as when jam and i arrived at 7pm half of the hall was already full. of people drinking! and the music and the models had everyone so enjoying themselves that many a drink was sold - bahahahah!

tomorrow i'll tell you about the fourchu ghost who stole not one, but TWO bottles of my wine!!! nobody here drinks wine but after getting a glass from one bottle and going back an hour later for my next glass - the bottle was empty!!!! and that happened with the second bottle too!

oh we had such a great time! it was a really fun event! almost all of the models went over and either kissed poor jambaloney on the mouth or rubbed their balloon boobs on him - he was so embarrassed! but everyone loved the music and he cued every song perfectly. i think the only person who could have dj'ed the fashion show better is my buddy LL Cool Joe. and Joey, we're still waiting for you to come and dj at one of our events.

sending much love to you all!
Posted by kymber at 6:21 PM