jambaloney and little Frankie are home. he is doing really good. the ladies at the hospital said he was such a good little man and they oohed and awwwed over him because he is so gorgeous. jambaloney put him in his carrier, he slept the whole way home. we got him in the house and he immediately wanted to go out. he went out on the back deck, his brothers went with him and so did we. we all sat out on the back deck for 20 minutes or so - just breathing the fresh air and looking at the beautiful sky. he ate - but they told us to feed him only a little - ya right. and then, when he has a million different comfortable places to go and sleep - he chose to sleep on this secretary desk. he doesn't even fit on it. but that's where he has been for the last 3 hours. he almost fell off at one point but caught himself and went right back to sleep. 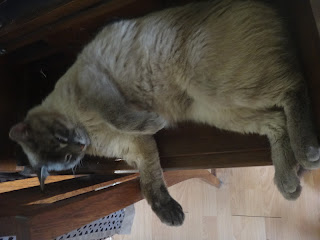 he's gonna be out all night running around. he is such a tough little guy. i am going to continue feeding him as much as he wants to eat until he starts putting on some weight. the ladies at the hospital said that he is in as good shape as he can be expected being that he is a stray. jambaloney asked about vitamin shots but they said he didn't need anything. we also paid extra to have laser castration as it cauterizes the nerve endings while cutting and the cut is much smaller and heals quicker.

as for poor jambaloney - ugh. he had quite the day and didn't tell me about it until he got home - he knew that my nerves were shot and he didn't want to add to that.

while driving into the city he heard a funny sound which he thought was a piece of metal stuck in the tire tread. after dropping off little Frankie he looked at both front tires and under the wheels and he saw on the passenger side a cracked casing and a loose wire. he used his phone to find the nearest dealer and it turned out to be a problem with the 4WD Vacuum Actuator. thank goodness when we bought the truck we bought a 5yr extended warranty so this was covered. our actual dealer is in the town an hour the OTHER way away from us but these guys said that they could take care of it. jambaloney explained that he had to pick up little Frankie and the guys dropped everything and took care of it right away. they also fixed the other side...buddy told him that they usually blow in pairs. all for $100 deductible. the job would normally cost $425!!! jambaloney still had plumbing stuff to pick up at Home Depot - he asked the guy if there was a bus nearby that he could take. they take him in their shuttle bus for free. AND picked him up.

as jambaloney is telling me all of this i can only imagine how panicked he must have been, then grateful and then relieved. he says that he loves cape breton - that we get some of the best servicse in the world here. i always remembered that when i left home 25 years ago - i always remembered that people here cared and did their jobs very well. it makes my heart swell when jambaloney, who grew up in the city, tells me this. i am glad that i came home. i am glad that i brought him and my two boys here. i am glad that little Frankie is still sleeping on the secretary desk.

i give thanks to the Lord. i am trying to be as grateful as i can be.
Posted by kymber at 8:42 PM