jambaloney was in to work yesterday - he had a great day! and got us FREE, nutrient-packed wild food!

as he normally works in the day, he sees the lobster and crab boats come in all the time and he loves watching the operation and learning new things. since the tuna boats only come in at night - he's never seen the tuna operation before. that changed yesterday when a tuna boat came in carrying a 400lb atlantic bluefin tuna - can you believe that!?!?!? 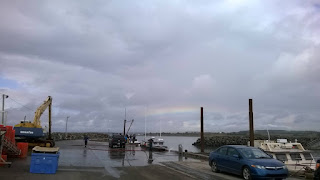 the boat pulls in the harbour and they use a big winch-thing to lift it out of the boat - have a look: 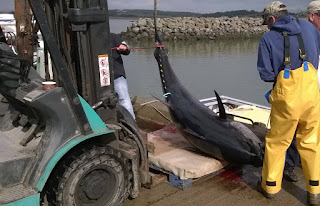 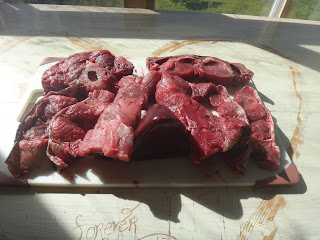 have you ever seen such beautiful red meat? a bunch of you who raise and slaughter your own animals would know - but this tuna was caught and processed in under 8 hours and after it was caught, was killed immediately, and then kept on ice until the boat got into harbour. jambaloney was so excited to have been there to have watched and these guys know what they are doing!

of course, we had to try some raw right away! the steaks from the head and tail are a lot fattier than the fillets that are used in sushi but hey - we aren't about to kick a gift horse in the mouth! the raw tuna with just a little salt was divine and waaaaay better than the thinner, less fatty fillets.  then of course, we tried half a steak grilled on the bbq and half pan-fried in butter. 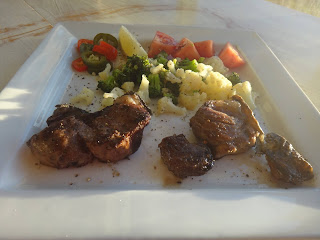 holy moly! talk about kick-you-in-the-face calcium and iron overdose!!! what does it taste like? how about really, really, strong, fatty, gamey moose meat combined with a pasture-fed cow's beautiful liver and kidney. a little goes a long way and that is fantastic for us as we are cutting down our meat consumption and wild, free nutrient-dense tuna fresh-caught from our beautiful ocean by our friends and jambaloney's colleagues - wow! double wow! that tuna is gonna last all winter long!