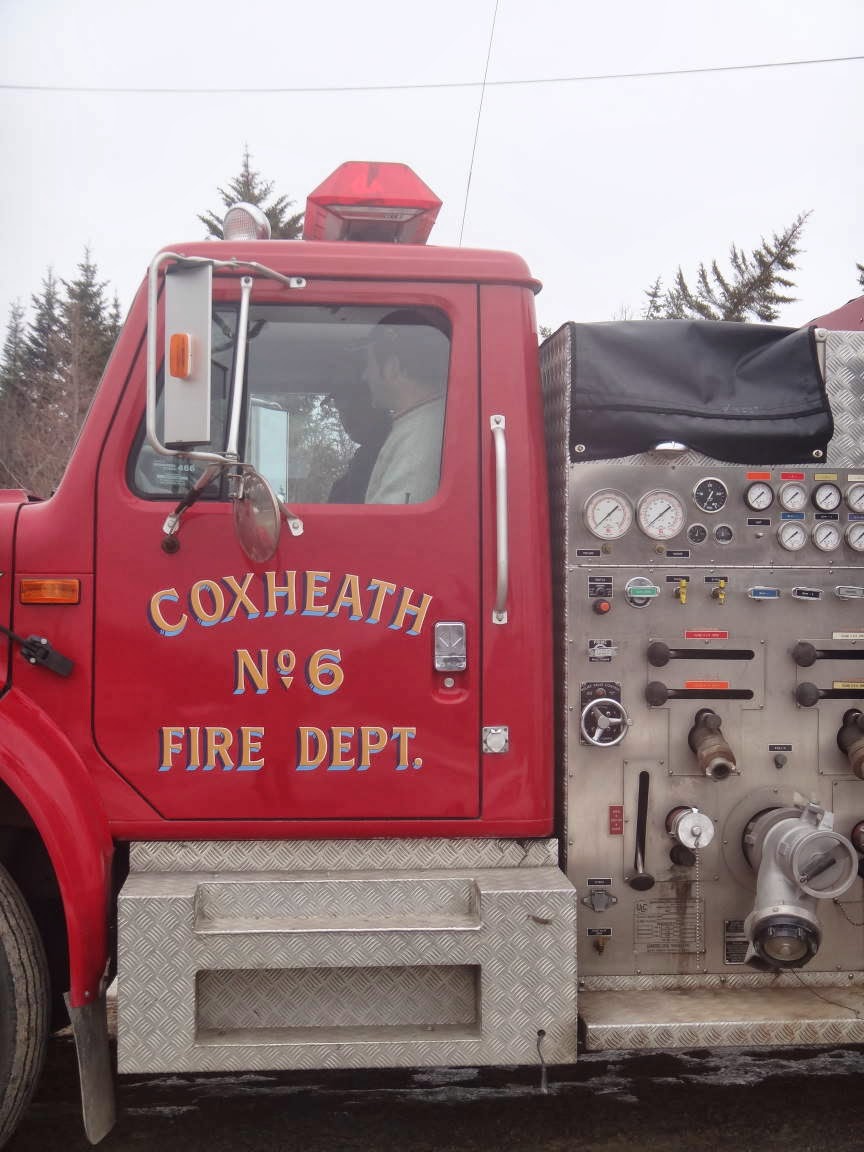 isn't she a beauty? that's our new fire truck that our friend s found for us. and that's jambaloney in the driver's seat and my brother b in the passenger's seat!

now kids, you all must remember that jambaloney has the driving experience of a 17yr old. and he has never driven a standard. NEVER. and this truck has air brakes.

we went down to the hall this morning for jamie to get training on the truck. our brother b is the only person who can back any of our trucks into our halls - he's a master at all different kinds of fire trucks! and he was going to teach jambaloney.

when i went out to take the pic i couldn't believe jam was in the driver's seat. he has the driving experience of a 17yr old and has never driven a standard. or used air brakes!!!! but our brother believes in hands-on training and he encouraged jam the whole time. our brother b had jam drive the truck about a kilometer up the road, all the while explaining different stuff, getting him to shift different gears and whatnot, and then when they got to our neighbour r's house, b had jam pull in to their gawd-awful driveway. then b got in the driver's seat to back the truck out.

they came back to the hall...me and s were so super impressed that jam had driven the truck. his nerves were shot - remember he has the driving experience of a 17yr old and HAS NEVER DRIVEN A STANDARD.

we thought we were done for the day. but oh no. b had him back in the truck going the other way this time, took him to our church which has a big parking lot, made him turn in, turn around, back up and then drive back out. then jam drove the truck back to the hall. our brother b made him back into the drive of the hall and said he did a really good job. even though the truck was a little sideways. but our other brother d told me earlier that THE ONLY person who could back our firetrucks into the hall was b. our brother d said he couldn't and neither could our other brother d. only b could do it.

so jam got out of the truck to much acclaim from our friend s who gave him a big hug and told him he did real good. so did everyone else.

but it was because of our brother b's calming attitude and manner of teaching that jam did so well.

do i sound proud? it's because i am. i am really, really proud of bringing that city boy here who had never even driven a vehicle until he was 45 and that was only to get us here. and now he is learning how to drive a big, giant firetruck with air brakes.

( a big thanks to my brother b. he has such a compassionate manner about him, he never looks down on anyone, he never judges, he just encourages. and he made me proud of him, too. and i thank him from the bottom of my heart for making my jamby comfortable enough to try and do this. thank you b)