we were expecting our first solid overnight frost the other night and so we went and cleaned our tomatoe plants. this is our last haul of fresh tomatoes for 2015. 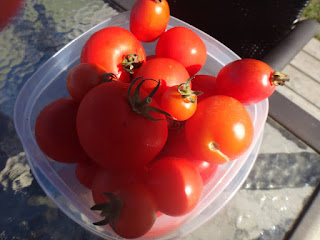 here is a big giant bag of frozen tomatoes that we harvested over the past 2 months. 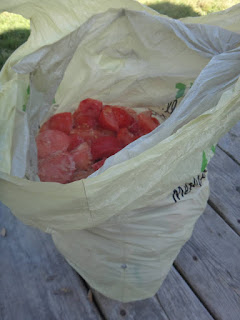 even though we love eating tomatoes, you can only eat so many tomatoes a day. so we ate them fresh and then froze the ones we were unable to eat. those tomatoes were picked and frozen at their peak ripeness and will be cooked into a sauce and then canned for near-fresh tomatoe sauce over the winter.

here are some tomatoes that aren't quite ripe yet so i am ripening them in the greenhouse. it looks like we'll still be eating fresh tomatoes until the end of october at least - not too shabby!

we also picked all of the green tomatoes - these will be turned into chow-chow and then canned. 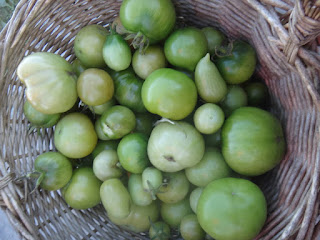 chow-chow has a very interesting history. i grew up eating chow-chow but jambaloney is only familiar with indian-style chutney. according to wikipedia:

"Chow-chow has become regionally associated with the southern United States, Pennsylvania, New Mexico, the Appalachian Mountains, and the Maritime provinces of Canada."

which totally makes sense as chow-chow is said to have been brought through the united states by the Acadians, during the expulsion of the Acadians from Nova Scotia and other maritime provinces.

i have always found the history of the expulsion of the Acadians to be very interesting. lots of people don't know that the Acadians eventually found their way down to Louisiana and created the "Cajun" culture!

anyway - that's a lot of history to explain that the Acadians took green tomatoes, onions, cabbage and garlic and pickled it to make the version of chow-chow that i know. it is a great side dish/condiment with just about anything and if it is made with tomatoes that you grew yourself - it means that in the middle of february, you can still be serving tomatoes that you grew yourself.

jambaloney is in town, 3 cats and 1 dog are sleeping, and based on her sleeping patterns, i expect the dog to be up in an hour or so. we had her out in the yard yesterday afternoon for about 4 straight hours - it was a beautiful day and she laid in the shade, watched the cats, watched the birds (i swear she is part bird-dog!), sniffed the air, walked her perimeter, learned a bunch of new stuff - and didn't bark or yip when dogs further down are road were barking! what a relief! she's a very quiet and well-mannered dog already and she is still just a baby!!!

it's a good thing that she is such a quiet dog...this year is the first year that we have been consistently hearing coyotes yipping...and not just at night but during the day too! we have never heard them this loud or this close. it's a smidge frightening i must add...just another good reason to have a serious-sized dog on the property!